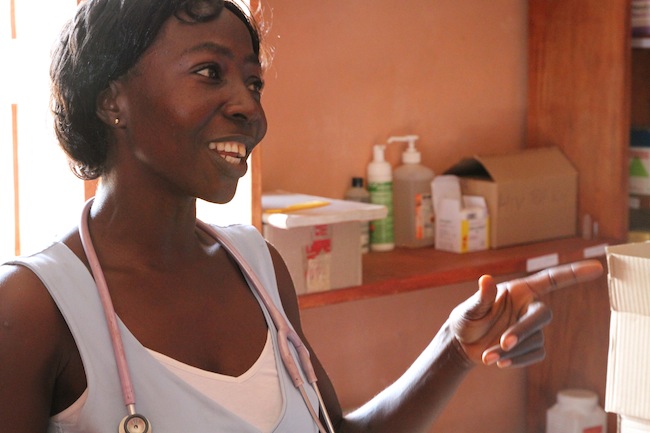 The neonatal resuscitation kit given by The Kambia Appeal is very useful. The last time I used it was the last week in November. It is very helpful, especially for delivering twins.

I attended the training in November 2012. This was my third training workshop with The Kambia Appeal.  This training has greatly helped me. It has really helped me do neonatal resuscitation and twin delivery, and I am putting this into practice and training volunteer health staff at my PHU.  The Kambia Appeal training has helped me to treat severely ill children, and we have the equipment to put things into practice. Last month I had 7 deliveries at my PHU.

The ambulance was called from the district hospital to go to Kamawah village to take a pregnant woman to the hospital for a C-section.  On the journey the patient became very distressed, and so the ambulance stopped here at Mile 14 so that I could try to help her.  The ambulance driver knew that there was a CHO at Mile 14 who would be able to look after the patient. I was able to assist with the delivery here at the PHU without the need for the woman going to the hospital for the c-section.  However, both the woman and the baby needed to be resuscitated and I used the neo-natal and adult resuscitation kits supplied by The Kambia Appeal for this.  The baby was 4.2kg – a very large baby. The mother and baby are both fine and everybody was so happy. The father even came to the PHU from Freetown to thank me.

I have attended all the IHLFS training: one course in 2010, two in 2011 and two in 2012. I received two prizes: one for my presentation on eclampsia and one on malnutrition.  The CHOs were responsible for training the MCHAs on the last course, which was a good thing, because I love to teach. The MCHAs at PHUs are seeing the pregnant women and Under 5s; they can pick up any problems promptly and tell CHOs of the problems.

MCHAs in Kambia graduate with limited practical skills, so they lack the real skills to resuscitate babies, which is why this training is so important and needed. From the Kambia Appeal training, MCHAs now get practical training, and the infant mortality rate has dropped because MCHAs now know how to resuscitate babies. The donation of basic medical equipment, like the Ambu bags has also helped.

I have seen that the maternal mortality rate has dropped significantly.  This is a result of the improvement of health worker skills – particularly MCHAs and CHOs – and the vacuum extraction kits (infants used to die in utero), but this new equipment can safe the lives of the babies and the mothers.

Free health care for mothers and babies is making a very positive difference, especially for women needing c-sections, but the free drugs are not always available at PHUs.

Watch an extract of the film version of Joseph’s interview at: https://vimeo.com/60565588

I used the neonatal resuscitation kit last week.  It was a prolonged labour.  The patient was from Matedineh, 10 miles away from the PHU.  She came here by motorbike taxi with one family member.  Other family members came later.

She was here for 2 days before she gave birth. When the child was born it was very weak and floppy and did not cry immediately, but there was a heartbeat. The MCHA summoned me and I then used a resuscitation kit on the baby. It started to cry. The outcome was good and I felt so happy.  I am happy to have the skills to save lives from the training.  The people in my community appreciate that the Kambia Appeal is giving equipment and improving skills to save their lives.

I remember a case where a woman came to the PHU with a baby that was half way out already, but it was stuck, and we couldn’t convey her to hospital. There was no way to extract the child, so the child died. The mother survived, but I did not feel good about this outcome.  This was before we received the vacuum extraction kit from the Kambia Appeal. 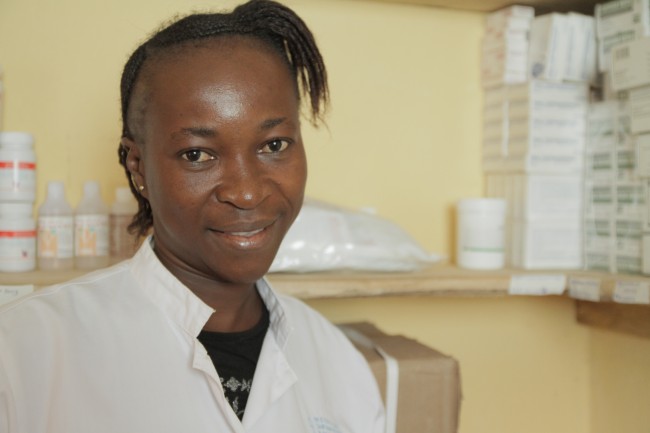 I have attended the Kambia Appeal training twice, most recently in November 2012. I was due to attend the HPS Special Resources Training in December but I was away looking after a sick relative.

The training was very useful.  I learned how to do a breech delivery, and I remember Dr Holmes saying “Hands off for a breech”.  I also learned about kangaroo care for the newborn, life-saving skills and how to resuscitate a newborn baby that does not cry straight away when born. I am motivated. I am able to do a god job as a result of the training. The number of cases that I refer to the hospital is reduced as I can do more at the PHU.

TBAs are giving us problems.  We talk a lot but they don’t listen. One TBA is very good and works well with us.  We give her 5,000Le for each pregnant woman who she brings into the PHU, and we have given her a key to the delivery room.  There are 8 TBAs in the PHU catchment area (3,781 people).  Because we are very close to the border with Guinea, 55% of our patients are from Guinea.

Teenage pregnancy and early marriage is a big problem for us here.  For pregnant teenage girls, I do a vacuum extraction delivery using the kit from the Kambia Appeal, because the girls are not fully mature physically.  I perform an episiotomy and a vacuum delivery when there is no full second stage.  I use the vacuum kit on average for one delivery out of eight.  I last used it in November 2012, but it is now spoilt and needs to be replaced.

Rugiatu gave us three case study examples of how she has used skills learned from IHLFS training:

Last week I delivered twins successfully. At 6am a woman was brought to the PHU.  I did my examination and using my knowledge from the training course, I discovered that it was twins.  I had learned that I can work out if there are twins by listening above and then below the umbilicus. And how to detect if a baby is cephalic or breech. I know that with a twin delivery, I may need to resuscitate a baby, so I get my nurse ready.  At 12.30pm the woman is 6cm dilated but her bladder was full, so I inserted a catheter.   The first baby was a normal delivery and it cried immediately and there were no problems. The second baby, as it was coming, I could see its anus, so I knew it was breeched.  I remember the advise of “Hands off the breech”, and the baby was delivered.  I had to resuscitate the baby using the kit given by the Kambia Appeal.

A woman came to the PHU, she already had 7 children, this was her 8th pregnancy. I did my examination and delivered the baby safely.  Ten minutes later PPH occurred. I was given misoprostal at the IHLFS training in November 12, so I inserted 4 tablets into the woman’s anus and this arrested the PPH. I kept the woman in for 2 days for observation and then discharged her. Without the IHLFS training I would not have been able to do anything, but I have the skills and equipment now and I use them and I succeed.

After the IHLFS training in November I went back to my PHU and a woman came in from Framoia town in Guinea. The woman had a full bladder. I was straight from the training. I examined the woman- temperature, blood pressure and pulse- these were all stable. I remembered that on the training they had taught us “vital signs are important- they can speak”. I diagnosed that the woman had a retained placenta. I felt that I could deal with this case at the PHU and I did not need to refer the woman to Kambia District Hospital. The nurse inserted a catheter, we gave a Noralgene injection to relax the muscles and opened an IV line and 10 minutes later we delivered the placenta. I observed the woman for 24 hours and then discharged her home.

See our films on VIMEO

and earn money for the Kambia Appeal